In 1990, the Sunland Training Center of Gainesville officially changed its name to Tacachale, a word derived from a Timucuan ceremony, meaning “lighting a new fire.” This occasion marked a turn for the center, and the new name reflected the hope for the future of this longstanding facility, which opened in 1921 as The Florida Farm Colony for the Epileptic and Feeble Minded.

As we head into a new decade and as Tacachale approaches its 100th birthday, the center is still lighting ceremonial fires as a part of its annual holiday events.

This year’s tree lighting ceremony, which took place on December 5, was a celebration of new fires, set against reminders of the old ones. Standing guard over the field where the holiday festivities took place, is a water tower with Tacachale painted on it.

On November 1, 1921, after six years of planning and construction, the Farm Colony opened its doors. The property spanned 4,000 acres, 3,000 of which were donated by the citizens of Alachua County. At the time, the facility included three buildings, where the 240 residents lived, worked, and attended school. There was also a farm, where residents who had the physical capability worked. In 1927, the farm consisted of 198 acres of corn, peanuts, and peas, and over the following decades it grew to include cows, pigs, geese, and more than 25 different fruits and vegetables.

At the 2019 Tree Lighting Ceremony, members of the Gainesville community and Tacachale staff and residents took their magical surroundings in together. They were all aglow in the same holiday lights. People huddled together to ward off the cold of the evening as volunteers served cocoa and cookies. The sounds of voices mingled with the festive songs of a local orchestra.

These reminders of the holiday season also served as reminders that Tacachale is hardly a place apart from the community, but rather is a beacon at the heart of it. Local news anchor and master of ceremonies David Snyder underscored this point as he introduced the ceremonial lighting of the Tacachale Christmas trees. “We are going to be lighting some lights tonight that symbolize the Christmas season,” he said, “but Tacachale is a light in our community 365 days a year.”

In 1957, the Farm Colony had a population surge and a name change to the Sunland Training Center of Gainesville. This name distinguished it from the newly opened Sunland Training Centers of Orlando, Fort Myers, Marianna, Miami, and Tallahassee, which all opened between 1960 and 1967. During this period, the census reached a peak, swelling to more than 2,000 residents.

The 1970s saw a shift in attitude and people with developmental disabilities were increasingly integrated into mainstream society. Sunland expanded their educational programs and began offering vocational training with the goal of empowering residents to work within the community. This philosophy would eventually lead to the revitalization effort of the 1990s, when Sunland Training Center of Gainesville became Tacachale. This name change signaled a new person-centered approach that focused on the gifts, talents, and skills of each resident.

The first Tree Lighting Ceremony was held in the middle of this shift toward a philosophy of community participation and individualized supports. Thirty-five years ago, Tacachale wasn’t even Tacachale yet, but the lights of the holiday season were already bringing it together with the community in anticipation of the new fires to come.

At the 2019 Tree Lighting Ceremony, Tacachale Assistant Superintendent Julie Waldman took a minute to reflect on these shifts in ideology and the expansion of Tacachale and its holiday events. “Thirty-five years ago,” she said, “we started this tradition and it is still going strong, gets better every year. The lights are brighter, the smiles are bigger.” Waldman’s words rang out into a sea of bright lights and big smiles.

Those smiles remained as the music paused and the lights went out in preparation for the ceremonial lighting of the four trees at the heart of the festivities. In unison, led by David Snyder, the gathered crowd counted down, “ten, nine, eight.” Wisps of breath danced around the audience, as people huddled together for warmth against the cold.

But they kept counting down. “…three, two, one…” And then as Snyder shouted, “Light it up!” the trees sprang to life.

The world was quiet, but only for a moment, as the sound of sleigh bells rang out in the distance, signaling the arrival of Santa Claus. And with this, Tacachale joyously welcomed the holiday fires and looked forward to the ever-brighter lights and ceremonial fires of the new decade to come. 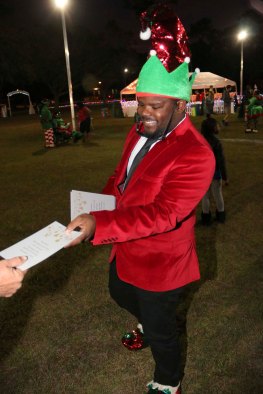 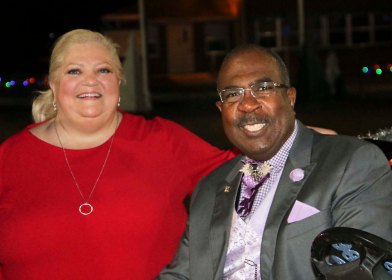